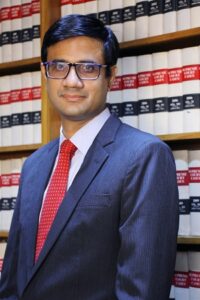 2004: Enrolled as an Advocate of the Supreme Court of Bangladesh.

2002: Called to the Bar of England and Wales from the Hon’ble Society of Gray’s Inn.

Arbitration : Conducted arbitration proceedings on behalf of a number of local and foreign companies, firms and NGOs, including CARE-Bangladesh, Dunham-Bush Sdn. Bhd of Malaysia, BD Foods Limited and the Bangladesh Petroleum Corporation.

Uzbekistan Airways v Airspan Ltd. (High Court Division) reported in 10 Bangladesh Law Chronicles 614. Represented a local travel agent in proceedings where arbitration in Uzbekistan were successfully prevented from being initiated on the ground that legal proceedings had already been initiated in Bangladesh. This was one of the first cases under the Arbitration Act, 2001 which settled the law that if the seat of arbitration is fixed outside Bangladesh, then legal proceedings before the local courts are not barred.

Smith Co-generation (Bangladesh) Private Ltd. v Bangladesh Power Development Board (BPDB) (High Court Division). Represented a foreign company in proceedings where an attempt by the BPDB to set aside an ICC award was successfully prevented.

Bangladesh Power Development Board v Arab Contractors (BD) Ltd. (High Court Division). Represented the state run electricity provider in challenging an award passed by a local arbitral tribunal.  An appeal from this case is now pending before the Appellate Division.

Insurance: Drafting security documents, syndicated finance documents and other legal instruments for banks and financial institutions. Represented banks in a number of cases before the High Court Division and the Loan Recovery Courts. Provided legal assistance for the conversion of conventional banks to Islamic banks.

Catherine Masud v Md. Kashed Miah and ors  (High Court Division). Representing an insurance company against a claim lodged by the heirs of the deceased in a motor vehicle accident. This case will determine the extent of the liability of insurance companies in Bangladesh in case of fatal accidents.

Company Law: Drafted and appeared in applications for altering the Memorandum of companies, mergers, liquidation, rectification of share registers and minority protection.

Deep Sea Navigators Ltd. and ors v Registrar, Joint Stock Companies and Firms and anor (High Court Division).  Represented shareholders in an application for rectification of the share register of the company.

Matters: Appeared in a number of cases where the government violated the human rights of citizens

Allama Delwar Hossain Sayedee v Bangladesh and ors  (High Court Division), reported in 18 Bangladesh Law Times 188. Obtained an order from the court allowing Mr. Sayedee to travel outside Bangladesh, after the Home Ministry had imposed restrictions on his travel abroad.

Employment Law: Drafted tailor-made employment contracts for foreign and local companies. Provided employment related advice to a number of newspapers including the Jai Jai Din, Amar Desh and the Naya Diganta. Was a member of the legal team that negotiated a settlement between the employees and the previous management of Jai Jai Din. Appeared before the Labour Appellate Tribunal and the High Court Division on behalf of both employees and employers. Recently, was involved in and won a landmark case on behalf of employees before the High Court Division involving participation in profits by employees of Unilever. The judgment prompted Parliament in 2013 to introduce changes to the Labour Act, 2006.

Provided legal advice to various foreign companies in relation to the offer of Restricted Stock Units, phantom shares, etc. to employees of their subsidiaries in Bangladesh.

Golam Sarowar v Bangladesh Jute Mills Corporation (BJMC) and ors (High Court Division). Successfully represented a former employee of the BJMC  against an attempt by the employer to adjust losses suffered by the BJMC (during the tenure of the employee’s employment) against termination benefits payable to the employee.

Mehedi Hasan (Md) and ors v Bangladesh and ors (High Court Division) reported in 19 Bangladesh Law Chronicles 472. Successfully represented employees of Unilever (Bangladesh) Limited in preventing an attempt to reduce the extent of their participation in the profits of the company.

Advised both foreign and local companies in relation to government contracts and tenders. Conducted judicial review applications against a number of major state-run corporations, including Bangladesh Chemical Industries Corporation (BCIC) and Bangladesh Steel and Engineering Corporation (BSEC) in relation to non-compliance with tender conditions.

Advised Northrop Grumman with regard to the sale of equipment to the Bangladesh Air Force. Also advised various ammunitions suppliers in relation to the role of the Office of the Director-General of  Defence Purchase and the Ministry of Defence.  Verified contracts for a foreign supplier  for the sale of helicopters to the Bangladesh Navy.

Appeared before the Review Panel of the Planning Ministry (which  is a special body dealing with disputes arising out of Govt. Tenders). Recently appeared on behalf of the International Container Terminal Services Inc. of the Philippines against the Chittagong Port Authority  in relation to the tender for the New Mooring Container Terminal.

Md. Abidur Rahman v Bangladesh and ors (High Court Division). Representing a client in relation to irregularities by the Road and Highways Department in conducting a tender for toll collection over a bridge.

United Landport Teknaf Limited v Bangladesh and ors (High Court Division). Successfully represented a tour operator (operating from a private jetty) against an attempt made by the government-approved jetty operator to compel it to use its jetties.

Shah Abdul Hannan v Bangladesh and ors (High Court Division). Successfully represented a hospital in respect of an attempt by the Road and Highways Department to build a road over its land.

Md. Ajmal Hossain Khan and ors. v Bangladesh and ors (High Court Division). Successfully represented inhabitants of a village against an attempt by the Government to evict them.

Criminal Law: Worked with a team of lawyers from 9 Bedford Row, London in defending the leaders of a political party who were being tried for war crimes.

Defended Mr. Md. Kamaruzzaman before the International Crimes Tribunal-2, Bangladesh against allegations of crimes against humanity. The judgment of the Tribunal was the first in Bangladesh to deal with the issues of joint criminal enterprise and superior responsibility for international crimes.

VAT, Customs etc: Conducted litigation on behalf of and against the National Board of Revenue.  Drafted and conducted Income Tax Reference Applications. Advised and appeared on behalf of pharmaceutical companies, agro-processing companies and banks in relation to income tax disputes.  Also appeared before the High Court Division on behalf of a number of Universities, including, North South University and the International Islamic University Chittagong in relation to their tax exemptions.

Ibn Sina v National Board of Revenue (High Court Division). Represented a private medial institution against the imposition of VAT.

Bangladesh Withdraws from Customary International Law: The Practical Implications of Trifling with Custom, Journal of Politics and Law (2014) Vol 4 at 163, http://www.ccsenet.org/journal/index.php/jpl/article/view/39728/23164